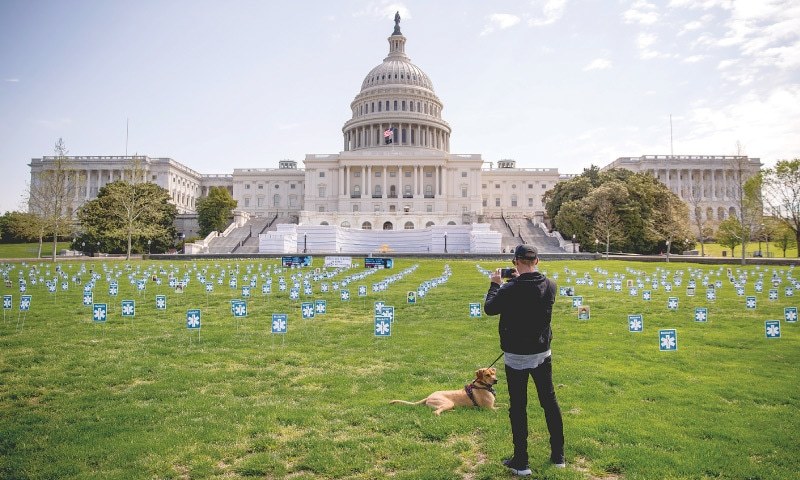 WASHINGTON: The International Monetary Fund (IMF) has urged the international community to make available a universally low-cost vaccine to stop the outbreak of the deadly coronavirus.

The Covid-19 pandemic, which began in December 2019 in China, had killed almost 150,000 people across the globe by Friday afternoon and infected more than 2.2 million.

In its Fiscal Monitor report for 2020, the IMF underlined the need for “global coordination for a universally low-cost vaccine and to support countries with limited health capacity.”

The report, released in Washington this week, urged governments to take “swift and concerted” measures “commensurate with the severity” of the health crisis, with fiscal tools taking a prime role.

“Countries could be vulnerable to new waves of social unrest … if support measures are seen as insufficient to mitigate the COVID-19 crisis and its economic fallout or as unfair by favoring the wealthy,” the IMF added.

The report urged governments to continue their support measures until the situation stabilized because withdrawing them now could spark further unrest.

“Price increases for basic goods and energy products or reductions in public wages are more likely to face strong opposition because they threaten the livelihood of vulnerable segments of the population,” the IMF warned.

Similarly, taking away important benefits from a societal group can organise strong opposition, particularly from the urban middle class, the report added.

“High or rising levels of poverty and inequality, particularly in countries with weak social safety nets, can contribute to unrest,” the IMF reminded governments. “Protests are also more likely in countries with histories of widespread corruption, lack of transparency in public policy, and poor service delivery.”

Underlining measures for preventing unrest, the Fund said that a key priority was to fully accommodate spending on health and emergency services.

The organisation cautioned that some countries were more vulnerable than others to new protests, particularly if policy actions to mitigate the Covid-19 crisis were “perceived as insufficient or as unfairly favoring large corporates rather than people.”

The protests were “more likely in countries with histories of widespread corruption, lack of transparency in public policy, and poor service delivery,” the report added.

It noted that over the past two years there has been an increasing amount of strife worldwide over economic policies.

Protests broke out in Ecuador, Haiti, and Iran over fuel price hikes, in France over pension reforms and in Chile where an increase in public transportation fares set off unrest.