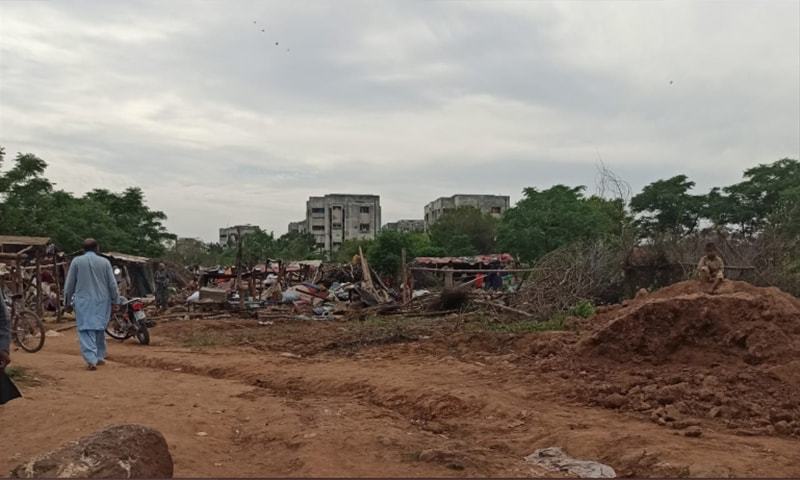 The Islamabad administration on Thursday ordered an inquiry after huts in which some 75 poor families were living were razed in the capital’s G-11/4 area.

“Absolutely unacceptable,” declared Human Rights Minister Shireen Mazari on Twitter after the operation at the kutchi abadi had been carried out.

The minister said action will be taken immediately if any police official is found involved in the incident.

“Shocking and criminal behaviour on part of those involved,” she remarked, announcing that the 75 evicted families would be provided shelter and compensation as soon as possible.

Islamabad Deputy Commissioner Muhammad Hamza Shafqaat in a tweet said the concerned official of the enforcement department had been suspended over the action.

The authorities that ordered the operation “say it (the area) was a den of professional beggars, however, the inquiry will find out [the] facts”, he added, saying food and shelter were being arranged for the people on the site.

Photos and videos shared on Twitter showed a tractor tearing down structures as helpless dwellers look on.

Social activists criticised authorities for razing the huts and making hundreds of people homeless in the middle of the coronavirus pandemic.

“This is how the working people, the daily wagers, are being looked after in Islamabad. Kudos to everyone who made the evictions possible in the times of Covid-19,” tweeted Tooba Syed, a member of the Women Democratic Front and visiting faculty at Quaid-i-Azam University.

“The Pakistani government telling people to #StayHome while bulldozing the homes of the poor,” wrote Ammar Rashid, a researcher and political worker.

He shared a video in which a woman from the locality speaks of how the residents begged the authorities to spare their homes as they didn’t have food to eat “but they showed no mercy”.

Update April 16, 1 p.m. MT: After this article was originally published, the crew members said they and about 18…