Once a tool for relaying militant propaganda, FM radio being used in Swat for Covid-19 education – Pakistan 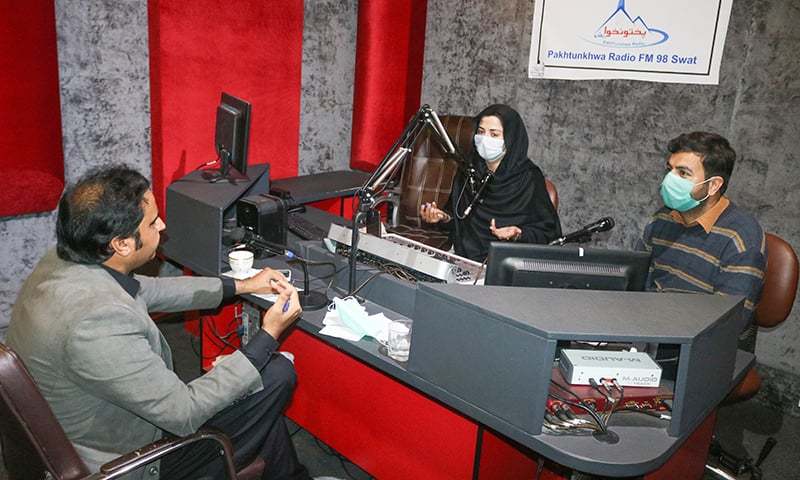 It was once used by militants to disseminate anti-state propaganda, but FM radio has today found a new purpose in Khyber Pakhtunkhwa’s Swat valley: providing health guidance to a population on edge and seeking answers amid the coronavirus pandemic.

The medium is being used to create public health awareness and educate residents through ‘radio clinics’ as the Covid-19 outbreak keeps them locked up in their homes.

Also read: These three brave men in Swat are volunteering to carry out last rites of those dying from Covid-19

Pakhtunkhwa Radio FM 98, a provincial government-run radio service in Swat, has been broadcasting regular programmes since April 2017. However, after the government imposed a lockdown to curb the spread of the novel coronavirus, closing private hospitals and clinics, the station’s administration decided to launch a special transmission to facilitate the people of Malakand division with health consultation services and information to combat the virus.

“We launched the radio clinic transmission on March 20 in the wake of Covid-19 with the aim to educate people about prevention of the virus as well as to facilitate those who are in need of health consultation,” said Abni Amin, director of the Swat Regional Information Office.

He revealed that more than 90 doctors have so far provided services during the transmission and nearly 6,000 people from across Malakand division have contacted them for health-related issues.

Aside from the radio clinic, various educational and entertainment programmes are also being broadcast through Radio FM 98 to keep citizens aware and entertained during the lockdown.

It is a far cry from the situation about 13 years ago, when the then TTP chief Mullah Fazlullah — once known as “FM Mullah” or “Mullah Radio” — became famous for his fiery radio speeches through which he conveyed militant propaganda in Swat.

For the next three years until Pakistani armed forces pushed Fazlullah and his accomplices out of Swat through targeted operations, bloodshed disfigured the picturesque valley’s natural beauty, education remained banned and terror reigned supreme.

But times have now changed.

“The best thing in my view about the radio station is this: the same medium that was used just 13 years ago against education, which the militants termed anti-Islamic and anti-sharia, is now being used to educate people and raise awareness for the prevention of Covid-19,” commented Niaz Ahmad Khan, a local journalist, who viewed the development as “a shift from negative to positive”.

The airwaves of TTP’s days were used to radicalise youth and impose a ban on women’s education; today, the government-owned radio station is mainly run by youth. “The militants were against women’s outdoor activities and through radio, they limited females strictly inside their homes. Now at this radio station, we have a woman journalist hosting programmes to disseminate information about the wellbeing of people in Swat,” Khan noted.

Several young as well as experienced journalists working for the radio station said they were proud to offer their services during the Covid-19 pandemic.

One of them is journalist Shaista Hakim, a resident of Matta tehsil, which remained a stronghold of militants in Swat where they not only banned women’s education but also destroyed hundreds of schools. Proclamations and orders warning girls against attending school were issued on FM radio on a daily basis.

“Those were the hardest days as I was a student and the militants had strictly banned our education. However, the difficult time has now passed and I did my Master’s in mass communication and journalism from Swat University and today I am proud that I educate thousands of people, including girls, through the same medium — the FM radio,” she told Dawn, saying she was proud to be the first and only female journalist working there.

Another young journalist, Waqar Ahmad Swati, working as a presenter on Pakhtunkhwa Radio FM 98 remarked that radio was a useful platform for young broadcasters where they could highlight local issues.

“During the Covid-19 pandemic, we host radio clinic with two doctors as guests. The show is popular because many people call for their health-related issues and get proper attention and consultations from the doctors,” he said.

However, he said the young journalists were working there on a contract basis and urged the government to take measures to regularise them so that they could continue their work.

Asmat Ali Akhun, another local journalist, said radio was a popular medium for the people of Malakand division, particularly in rural areas, and residents had the opportunity to not just remain updated by listening to the transmission but also engage with the programmes through telephone calls.