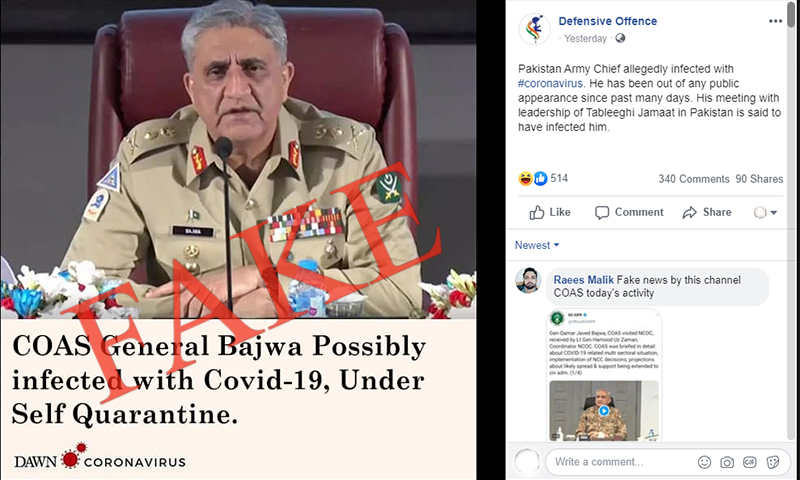 A fake social media post doctored to pose as Dawn.com surfaced on Facebook and Instagram on Tuesday and has remained in circulation on the platforms till the filing of this report.

The fake post, posted on the Facebook page ‘Defensive Offence’, attempts to mislead the public by suggesting that Army Chief Gen Qamar Javed Bajwa has been “possibly infected” with Covid-19 and falsely claims that he is under self-quarantine.

The doctored image, which features an image of Gen Bajwa and copies elements of Dawn.com‘s social media and Facebook posts layout, has also been shared on Instagram by an account titled ‘Defensive Offence’.

A caption accompanying the post on Facebook wrongly states that the army chief “has been out of any public appearance since past many days”.

In fact, Gen Bajwa paid a visit to the National Command and Operation Centre (NCOC) in Islamabad on Wednesday (today) where officials briefed him on the coronavirus situation.

Dawn.com contacted Facebook immediately when the fake post came to its notice. However, no action was taken by the tech giant till the filing of this report.

The post can be easily judged to be fake considering stylistic deviations from Dawn.com‘s social media updates.

For example, multiple words (that are not proper nouns) in the headline of the post start with letters in uppercase, which is against Dawn‘s style, as can be seen on any story on our website.

There is also a full stop at the end of the headline, a practice not employed in news stories on Dawn.com and a majority of news organisations.

This is not the first attempt to mislead the public by circulating fake news using the Dawn brand.

In October 2018, a fake screenshot doctored to pose as a Dawn.com news article attempted to mislead the public by suggesting that PML-N leader Maryam Nawaz was expecting and falsely claimed that “Dawn news” had obtained her medical reports.

Earlier in August that year, another screenshot of a fake news story falsified to look like an article on Dawn.com had surfaced on social media, in an attempt to mislead the public by implying that Pakistan Tehreek-i-Insaf leader Faisal Vawda had withdrawn a petition against the alleged corruption of Karachi mayor Wasim Akhtar.

In a similar occurrence, in June 2018, a fake Facebook post screenshot doctored to pose as Dawn.com was shared on social media. It attempted to misinform the public and stakeholders by suggesting that Afghanistan had accepted the Durand Line as an official border.

The doctored image had led to the Afghan National Security Council (NSC) issuing a press release that mistakenly assumed the post was legitimate.

Drew Doughty on resuming NHL season: ‘not going to be like...