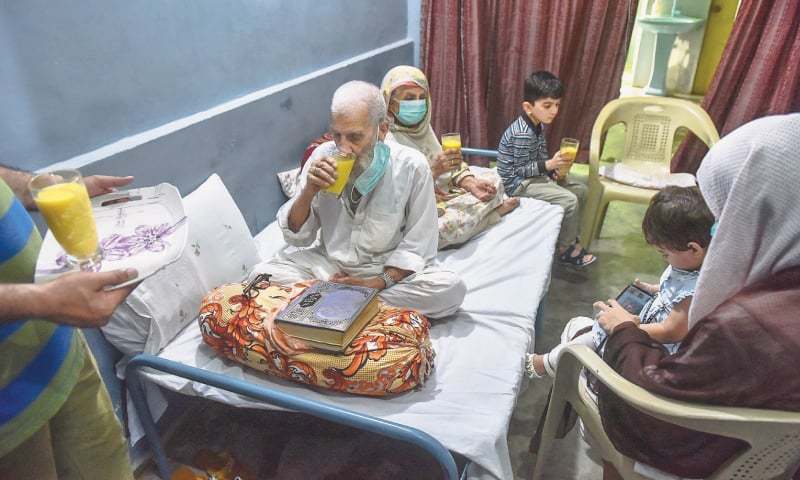 KARACHI: Meet Mr and Mrs Arshad Bhatti. Amid growing number of coronavirus cases, the myths and speculations surrounding the global pandemic and the depression fast gripping society, the couple in their 60s has something really encouraging to share.

Mr Bhatti tested positive for Covid-19 just two days before Ramazan. On doctor’s advice, his immediate contact — his wife Nasrin Bibi — was also tested and found suffering from the coronavirus.

With mild symptoms of the disease, they put themselves in quarantine in their two-room Korangi home. It sounds normal and usual practice. But the details known by them and their relatives and friends about the two-member family were making them worried about the days ahead.

“Nasrin Bibi is a patient of hepatitis C and suffering from chronic liver disease,” says a close relative. “She had suffered a chronic liver failure some nine or 10 years ago with mere hopes of survival. When she had fallen ill, the doctors had warned the family that her days were numbered. She, however, survived. But this new challenge of Covid-19 made everyone worried about her health as she was among the high-risk patients of the pandemic.”

But the two never lost hope and stayed strong to face the challenge. They stayed at home, spent time more in prayers and kept themselves in touch with relatives and friends through the mobile phone.

Mr Bhatti said he was already feeling well after two-day of quarantine and all those mild symptoms had disappeared but he completed his 14-day quarantine. But worries of relatives and friends about his wife were never over.

“By the grace of Allah she stayed fit and fine during the isolation,” said Mr Bhatti. “We decided not to pay heed to speculations and rumours and keep our spirits high. We spent most of the time in prayers and healthy activities. We had nothing to do with the outside world. One needs to be careful and take all precautions but never get scared or focus on negative things. We both tested negative one after another.”

If the story of the Bhattis sounds not much inspiring and motivating, the family of Jamaat-i-Islami’s Sindh Assembly member Syed Abdul Rasheed has much more than that to keep the people’s spirits high.

With the beginning of almost two-month lockdown, the legislator got himself engaged in social activities. From dawn to dusk, he remained actively involved in welfare work, providing rations and other relief goods to residents of his constituency’s poor neighbourhood, Lyari.

With least possible social distancing and precautions advised by experts, MPA Rasheed paid the price for his activism. He tested positive in the last days of Ramazan. But it did not end there.

The members of his joint family were tested and all 18 of them turned out to be Covid-19 patients. They had no other

choice but to lock themselves up in their two-storey home in Bihar Colony, including his mother in her late 70s, also suffering from tuberculosis.

The youngest among them was three-year-old son of the MPA. They all emerged negative after completing their isolation period.

“One needs to stay strong, get close to Allah and believe that this ailment would disappear sooner or later. We as a nation still need to go a long way and prove that we care for one another,” replied Mr Rasheed when asked about advice to people suffering from the coronavirus.

Views of doctor from US

Dr Sadaf Muneer who is monitoring patients in home isolation across Sindh while sitting at her home in New Jersey, United States, finds Pakistan among the luckiest countries in the world suffering from the pandemic where the number of people having recovered from the disease remains more than satisfactory.

“I have personally monitored the number of patients in their late 70s and early 80s recovering from the coronavirus in Karachi and other parts of Sindh,” she said.

These female doctors were brought back to the provincial health system through a technology-driven initiative called the eDoctor project by Educast in partnership with the Dow University of Health Sciences, which has so far succeeded in bringing back to the profession over 800 Pakistani lady doctors in different countries, who have resumed professional practice within the past two years after they had quit the profession because of family or social reasons.

“In the US we have not seen such a level of recovery among the aged persons,” said Dr Muneer. “But it doesn’t mean that we become careless or skip all precautions. Those who are safe need to be more careful for our senior citizens. And those who become infected need to stay strong to believe that they would come out of this.”

“Actually, first our maternal aunt was found positive who is also our neighbour,” said Hamidur Rahman, son of Fazalur Rahman and only person of the family who stayed safe from the infection.

“My mother is also a patient of diabetes and hypertension. I was really worried about my aged parents. But with Allah’s grace they all turned negative after completing their home isolation. We tried to keep things normal and not to get panicked. One can only face this with strong nerves and resolve.”

You’ll be Amazed at the Number of Courses Available to You.

North Korea fires barrage of missiles from ground and air

You'll be Amazed at the Number of Courses Available to You.