‘Ease in lockdown’ sets in confusion in Punjab – Pakistan 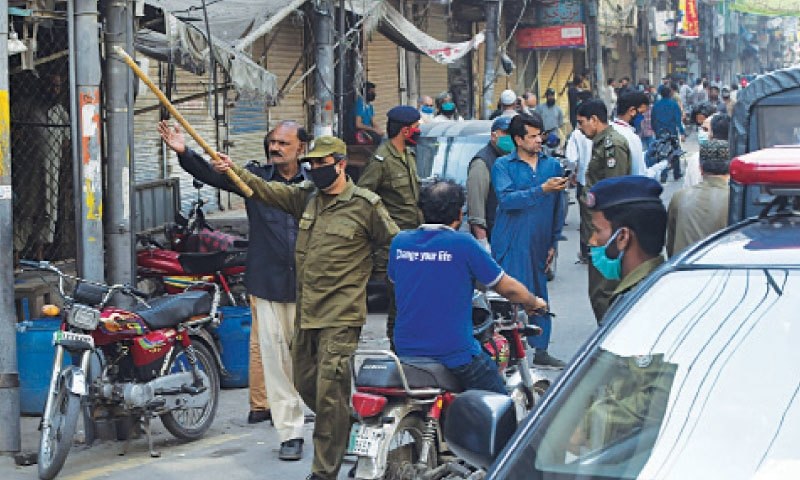 LAHORE: Taking the announcement of relaxing the lockdown and removal of restrictions on certain industries and professions as a free-for-all signal people opened various businesses on Wednesday morning even not allowed by the government.

The proprietors of value chains of the industries and occupations (not mentioned in the announcement) also resumed businesses in the morning ending the 23-day lockdown.

Alerted by the rush seen in various markets and bazaars with the customers giving a fig to precautionary guidelines regarding Covid-19, the authorities dispatched police contingents and got the shops closed.

Localities like Rehmanpura, Anarkali, Urdu Bazaar, Shadbagh and markets in suburban areas came under police actions too. The police won’t buy the logic that the businesses should be allowed to function for the provision of raw material and spare parts to the occupations given a go ahead to work.

A few tailors said how they could earn their livelihoods when cloth shops had been closed at a time when summer and Eid seasons have set in.

Similarly, book-shop owners say that as the new academic year has begun they have to get stocks from Urdu Bazaar but authorities are not allowing textbook publishers to do business.

There was confusion about the permission for hairdressers and a number of barbers as well as some beauty parlour owners opened shops but law enforcers forced them to close shops. The provincial authorities had to clarify the situation through a new notification in the afternoon.

There was more vehicular traffic on Wednesday than it used to be during the strict lockdown days, and most of the people on roads were violating physical distancing rules.

Most of the people riding motorcycles and in cars were without face masks and wearing gloves. Traffic wardens intercepted many cars and bikes for violating bans imposed under section 144 and challaned them.

In the suburban areas and mohallas, shops have been doing business with their shutters half down. They would open door when a customer approaches them. On the other hand, carts of fruits were never barred from doing businesses during any day of the lockdown and they would be dealing with customers even in late hours of night while dairy industry (loose milk and curd shops) were disallowed to function after 8pm.

CHINIOT: The partial lockdown announcement created confusion and chaos at many places where police and traders exchanged a word on Wednesday.

Police arrested 15 shopkeepers who tried to open their shops in Chiniot. Many shopkeepers turned up in the markets and tried to do the routine business but police thwarted their bid and arrested 15 of them for resistance.

BAHAWALPUR: A good number of shopkeepers and traders violated the lockdown and opened shops which attracted customers.

The shopkeepers dealing in cloth and others protested that they had been prevented to open their shops while book-binders and others began their business.

The cloth merchants and others demanded that the government also allow them to open their shops to earn their livelihood.

OKARA: Shopkeepers opened their shops at many places and had a brush with police who patrolled the marketplaces.

Aurangzeb Malik from Chiniot, Majeed Gill from Bahawalpur and Aslam Pracha from Okara also contributed in this report.

Govt, ulema stand on opposite poles over congregation advisory – Pakistan

Govt, ulema stand on opposite poles over congregation advisory - Pakistan

ISLAMABAD: Tomorrow (Friday) is expected to be a battle of nerves between organs of the state and clerics, after Minister…

14 departments has asked its employees to attend work during extended lockdown (Representational)Bengaluru: The Karnataka government on Wednesday identified 14…